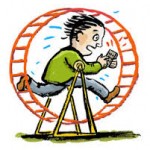 Trying to correctly time your entry point to the market is never easy. Just ask the experts.

In early February, strategists at a global investment bank were becoming alarmed at political events in Europe, the sequestration “crisis” in the US Congress and what they saw as an unseemly rush into equities.

The word went out to their clients to put a tactical alert on stock investing over the next one to six months.

A month later, however, the bank strategists1 decided to reverse course. The problems in Europe, they now discerned, were not systemic, and the likelihood was that continuing easy monetary policy would support investor sentiment globally.

As a result, the experts told clients to cautiously re-enter the market over a number of months.

The investment bank was not alone in changing its view. In December 2011, the veteran US newsletter writer Richard Russell (author of the Dow Theory Letters) told his clients in unequivocal terms to “get out of stocks”.

“I believe we’re going to see a brutal stock market that will shock the Fed and the bulls and the public — and all who insist on remaining in this bear market,” he said.2

But 15 months later, Russell has changed his tune, telling his clients to now buy stocks after a rally that has taken the broad US market to more than double the levels prevailing at its bottom in March, 2009.

“Yes, I know that this market is uncorrected during its long rise from the 2009 low, and I know that there are risks in buying an uncorrected advance that is becoming uncomfortably long in the tooth, but my suggestion is that my subscribers should take a chance (after all, Columbus took a chance),” Russell said in March, 2013.3

This sort of commentary isn’t just happening in the USA. In Australia, one of the most highly recognised market ‘gurus’, writer Alan Kohler, issued an ominous warning to his subscribers in a regular note in December 2011:

“The conditions are in place for a panic sell-off,” Kohler said. It is not certain that it will happen…but the risk is now such that you must take action. I will be significantly reducing my already reduced exposure to equities possibly to zero”.4

Explaining his mistake later, Kohler said he had not foreseen the extent to which central banks would continue to pump cheap money into the financial system.

That’s all very well. But the fact is anyone who followed his advice and went to term deposits has missed a rally in the Australian share market of more than 20%.

Providing reliable investment advice based on macro-economic, technical and political news is a tough gig. Having once worked for a newspaper, this writer knows well the dangers of splashing a front page story about markets that events overtake.

After a bleak session on Wall Street one Thursday, the Australian paper I worked on covered Friday’s local session and then threw forward for the Saturday edition with a doom-laden headline, trusting that US markets would stay down overnight.

Unfortunately, for us at least, Wall Street bounced back on the Friday, recovering all of the previous day’s losses and more. Our Saturday splash, along the lines of ‘No Respite from the Bears’, now looked a trifle silly, if not plain wrong.

For the everyday investor, the lesson is that the closer you are to media and market noise, the harder it is for you to pay attention to the bigger picture.

Markets are moving constantly as news and information is built into prices. Sentiment is buffeted one way, then the other. Millions of participants make buy and sell decisions based on news or their own individual requirements.

The job of media and market analysts frequently boils down to creating plausible narratives around often disconnected events so that it all appears seamless. Then the next day, you start all over again.

As a broker or a journalist, whose horizons are in minutes, this approach to markets makes sense. But for investors with long-term horizons, second and third guessing money decisions based on the news of the day is unlikely to deliver sound results.

A better approach is to work with a trusted advisor in building a diversified portfolio of assets tailored for your needs and risk appetite. The portfolio is rebalanced regularly to match your requirements, not according to what is happening in the markets. Tactical asset allocation can sound tempting, but there is always a risk that the news overtakes you. Then you are left having to change everything all over again.

As a wise man once said, running inside a moving bus won’t get you to your destination any quicker.