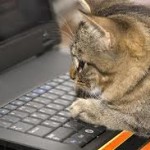 UK newspaper The Observer staged an experiment, pitting a panel of market professionals and a group of students against a ginger feline called Orlando in a competition to see who would have the most success in picking stocks in 2012.1

Each team invested a notional £5,000 in five companies from the FTSE All-Share index at the start of the year. After every three months, they could exchange any stocks, replacing them with others from the index.

The professionals used their experience, insights and market knowledge to select stocks. The cat’s method was rather less elaborate. Orlando simply threw a toy mouse onto a grid of numbers allocated to stocks in the index.

The newspaper reports that while the cat was trailing the pros at the end of the September quarter, his feline intuition kicked in the final months. As a result, his portfolio increased to end 2012 at £5,542. This represented a gain of nearly 11% for the year, outpacing the index’s 8.2% rise and shading the professionals’ portfolio by 7%.

While this experiment was hardly scientific, it does provide another reminder about the difficulty of generating consistent above-market returns by picking individual stocks or making forecasts. And it’s something to keep in mind when you are confronted by media and market prognostications for 2013.

In the US context, Bloomberg highlighted this difficulty recently in a piece entitled Almost All of Wall St Got 2012 Market Calls Wrong.2

While many forecasters began 2012 by issuing downbeat calls for equity markets – based on the ongoing Euro Zone crisis, China’s slowdown and US political logjams – the market value of global equities increased by about $US6.5 trillion last year.

As one analyst quoted by Bloomberg noted, many pundits were too wrapped up in the “fear du jour” and failed to keep an eye on the big picture.

So it was in Australia, where one prominent television finance commentator said at the end of 2011: “The conditions are in place for a panic sell-off. It is not certain that it will happen…but the risk is now such that you must take action. I will be significantly reducing my already reduced exposure to equities possibly to zero”.3

More fool him and commiserations to anyone who had the misfortune to act on his advice, because the Australian equity market delivered a total return in 2012 of 20% in local currency terms. Gains in many other equity markets were even stronger.

It should be plain by now that basing your investment strategy on someone else’s forecast is a haphazard way to build wealth. No matter how diligent and expert your forecaster is, unexpected events have a way of messing up their expectations.

As well, those who insist on believing that forecasting is a sustainable investment strategy tend to under-rate the capacity of capital markets to very quickly build all those expectations into prices. You think markets will tank/soar this year? So does someone else and they’re trading off that belief.

The good news is you don’t need a crystal ball to build wealth. You just need a regularly rebalanced diversified portfolio of assets designed for your needs and risk appetite. You also need to keep an eye on costs and taxes.

Most of all you need to keep your cool and exercise patience. Like a cat.